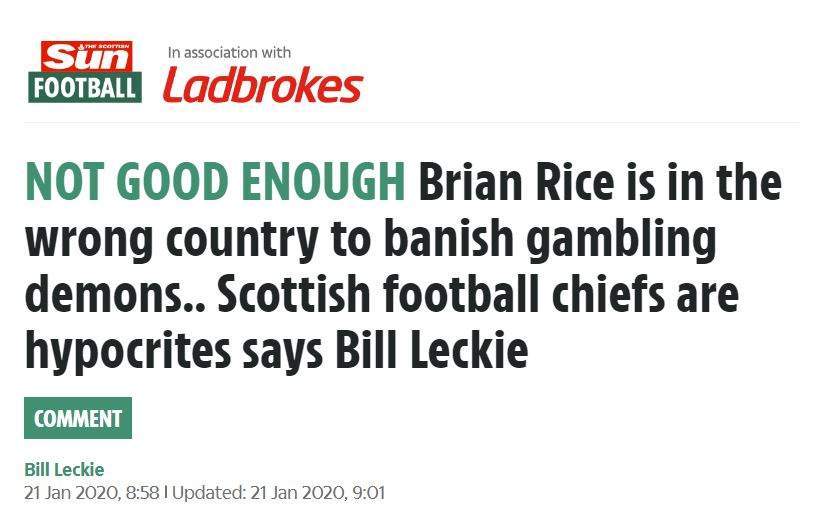 The Sun’s decision to show their association with a popular betting firm on an article discussing gambling addiction undermines the story completely and further highlights the massive problem we are facing.

It is promotions and brand advertisements such as this which are absolutely everywhere in Sport at the minute with Football leading the way.

Over the years betting companies have been getting more aggressive with their marketing tactics, collectively pumping billionds of pounds into promotions that are viewed by millions of susceptible individuals across the county with offers such as free bets or free live streaming when placing a bet being some of the most common promotions.

Approximately 500 people mostly made up of young adults kill themselves every year after developing an addiction to gambling.

The problem is rife in the sport with Football being a huge part of that. Cricket recently banned gambling ads something which Football should pay consideration to as the most watched sport in this country.

The UK is facing a gambling addiction crisis at the minute which is only going to get worse if more is not done to tackle the problem with Football being the primary focus.

Recent issues such as the FA’s association with the Bet365 promotion offering streams for football matches in exchange for placing a bet has caused controversy for the sport and shed further light on how it’s contributing to the problem.

This has been further highlighted today as manager of Hamilton Accies, Brian Rice came forward to the Scottish FA admitting that he breached betting rules due to his struggles with gambling addiction.

Giving out harsh punishments to individuals suffering from a disease is not going to solve anything, it essentially conveys a message that if you are suffering from addiction then you would be best advised not to say anything which is an absolutely horrifying approach from an organisation that was recently encouraging football supporters to speak up about mental health problems.

Brian Rice did breach the gambling rules but surely a bit of compassion and support from the Scottish FA would be more acceptable than simply a slap on the wrist.

I sincerely hope that the hearing on the 30th January will show a softer stance and common sense will prevail as anything else will not look good for football and the countries aim on tackle gambling addiction.

The problem is very real and situations like this prove that anyone can feel the effects of addiction and nobody should feel like they have to suffer in silence.

Many other active managers and professional footballs could also be suffering from the same problems so it’s important that Brian’s recent admission is met with support rather than criticism and is used as a message to others that it’s okay to seek help.

We are discussing partnerships with several football clubs up and down the country at the minute to try and promote discussions about addiction with the wider aim of reducing the stigma that currently surrounds it.

If you are struggling with gambling addiction there is help out there, do not be afraid to reach out.